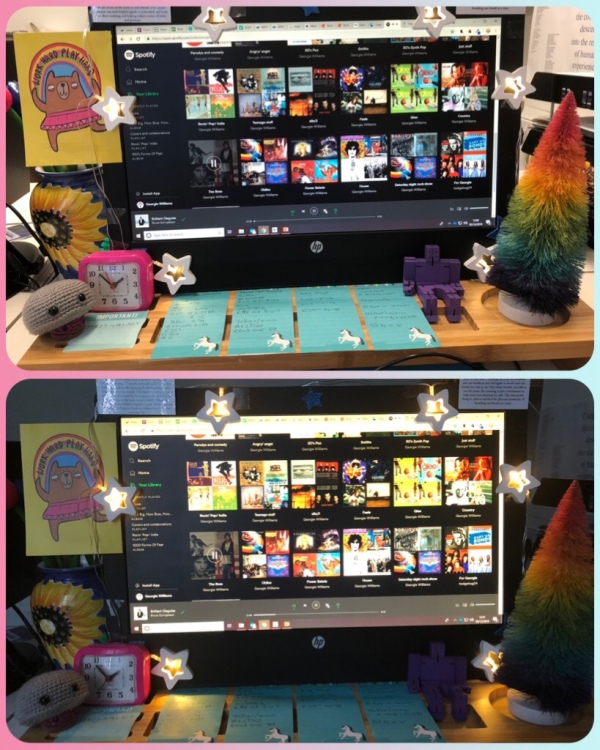 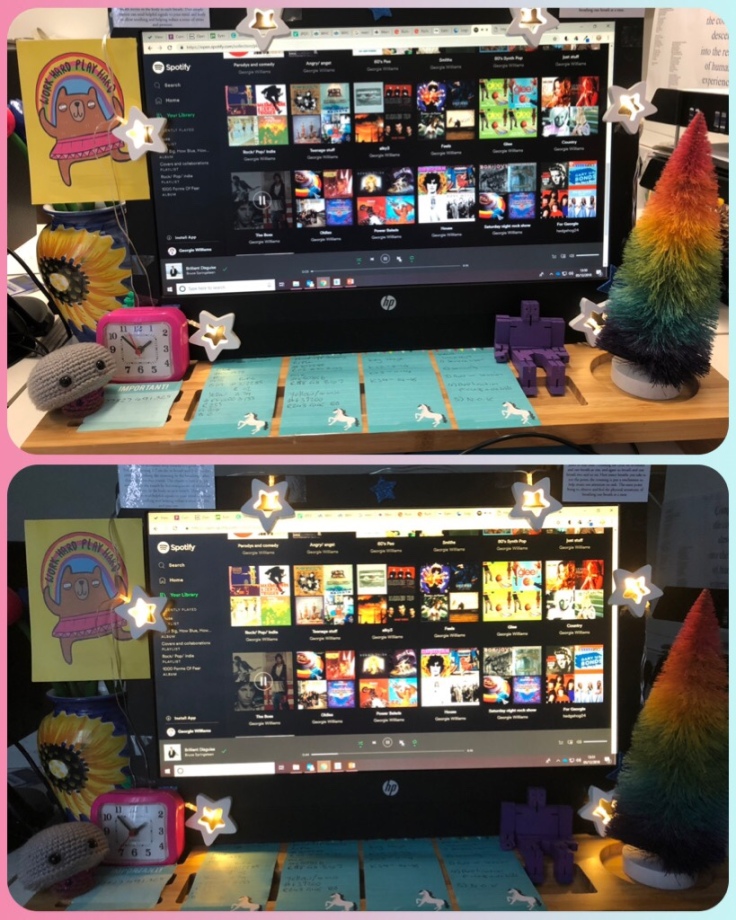 I like to make places and things “mine” make them reflect me and my personality, sometimes this surprises people like last year when a drunken colleague who got me as their secret Santa nicely summed me up saying “you’re pink and girly but not pick and girly” I love pink, my mobility aids are pink, I have quite a girly* bedroom but I’m mouthy and sweary and suggestions of laddette to lady have been made. I do know that all this gendering of colours and behaviours is to be fair a load of bollocks but lots of people do like to gender everything.

I think for me it’s important to make things and spaces reflect me is because I spent a lot of not time feeling like I lacked an identity which is one of the traits of BPD, I know it’s normal to go through phases and even identity crisis’ especially during adolescence and teenage but i was a human (dinosaur) chameleon I’d change the way I acted and even spoke around others it wasn’t deliberate I just soaked up other people’s personalities and mannerisms like an emotional sponge.

Of course I went through various embarrassing phases such as the emo phase (though I’m still an emo at heart) but it wasn’t just my tastes and appearance changing I didn’t feel I had a sense of self I felt like a hollow shell lacking an identity.

When I started my job six months ago I bought a pink desk organiser which has since been joined by pink in trays, a couple of toys and a coaster saying punch today in the face, I’ve also decorated it for Christmas and put up motivational postcards on the wall, for me it’s important that my work space reflects me especially as I spend so much time at work it really helps my wellbeing to feel it’s somewhere I belong physically as well as emotionally. Although I still experience the occasional existential crisis I feel more secure about who I am than I have in the past, part of this is having things I’m passionate about such as my job and writing, that’s not to say my job is my entire identity but mental health is obviously something I’m very passionate about so I’m Georgiesaurus I like pink, I swear a lot and often drink too much, I love House MD, my top artists on Spotify include Bruce Springsteen, First Aid Kit and George Ezra, I believe pineapple belongs on pizza, I hate Theresa May and I wear cat mittens.

“This is the only me you get”

I love live music I love going to gigs even though I don’t do it that often it’s something I really enjoy. As a rather emo teenager I’d queue up in the cold wearing just jeans and a t-shirt arriving several hours early to guarantee a place at the front by the stage with only the bare minimum of possessions with me to avoid the need for a bag. I would far rather be crushed and sweaty in the mosh pit than sensibly seated or in the less crowded areas at the back.

My first and only festival experience was not something I’m keen to revisit, between the lack of sleep, disrupted medication schedule and discomfort of camping day festivals and open air gigs are more my thing with a comfortable bed to return to

The days of post gig highs from adrenaline and lack of sleep have been replaced by planned annual leave the day after a night out to recover, I can’t stand for anywhere near the length of time a gig lasts and crowds bumping and pushing me not only increase my anxiety but cause physical pain and my rock my already shaky balance.

Today I’m paying for last night although the pain and exhaustion are worth it for such a good time seeing First Aid Kit a band that although I haven’t been following for long I’m now a big fan of and really love the music of, they’re also amazing live but despite some of the perks of going to a gig as a disabled person like queue jumping or getting a carers ticket for free I do wish I could still be near the front and not forced to be seated out of necessity.