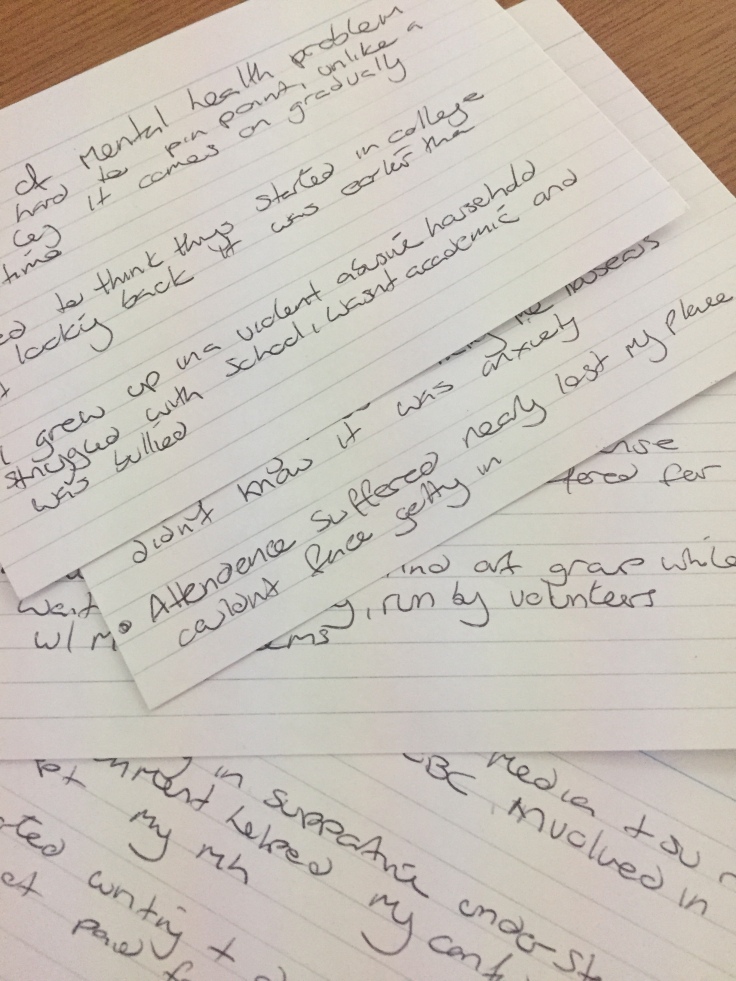 I’m clearly no stranger to sharing my life both online and offline, if I was this blog wouldn’t exist and you wouldn’t be reading this now but offline I’m starting to get tired of sharing my story and talking to people about my history and mental health. I’ve spoken to so many people in different settings from pop up cafes to fundraisers, funding bids for work and over 1000 young people through volunteering on the youth service I now run and although logically I know it’s not true it does feel as though there must be a shortage of people who haven’t heard my story by now.

Today I’m running training with my new volunteers on writing their personal story and although no one is forcing me to I don’t feel like I can avoid telling it again it doesn’t seem fair to ask them to share theirs and me not share mine, I’ve been thinking about it for a couple of weeks and Im still not entirely sure why I’m so against telling it now I think it’s partly that I’m tired of hearing it and then the fear of being judged and the shame of not really having achieved much in my life. I really do enjoy my job and it’s not that I think it doesn’t count but I’m in my 30’s and just getting started in career where most of the people around me are younger than me and more qualified. I don’t feel like an inspiration or someone to look up to, hearing other people’s educational backgrounds and qualifications reminds me of what I don’t have and what I’m not clever enough to ever achieve, maybe this is internalised to an extent but I also know the reality of my experiences in education.

When you’re known for one thing or people see you a certain way it can be hard to break that view no matter how much you change or try to move on you’ll still be seen the same way, I’ve talked about my past so many times as a volunteer and although not in great detail there’s a high chance that I’ll be meeting people in my new role that have heard my story, I don’t hide having mental health problems and it’s not like I even could if I wanted to I’ve made sure of that it’s something I’ll never be able to fully hide but even though it’s my own fault I wish I had a choice.